Whether you’re hunting in the woods or wanting to track movement on your property, having a solid trail camera is the way to do it. After all, how can you scout if you have nothing that tells you that you’re in a good area? Many cameras are similar with their features, which might cause you to feel overwhelmed.

Here we break down what makes the Gosira trail camera so great so that you can make a more informed decision about your potential purchase, and whether or not it’s the right fit for you and your family.

Quick Navigation
Who Is This Product For?
What’s Included?
Overview of Features
How to Use
Alternatives
Conclusion 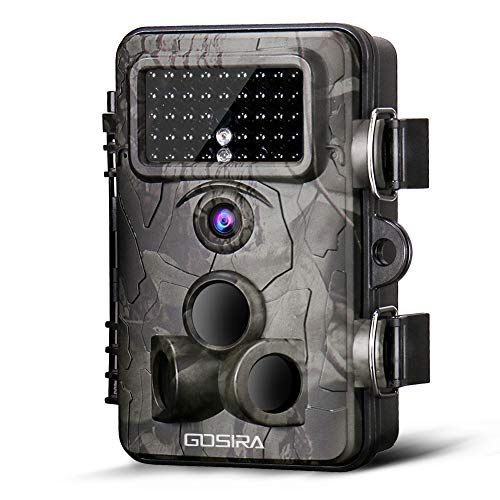 The Gosira trail camera is a tool primarily used by hunters and outdoorsmen; however, the vast number of features it has makes it an excellent camera for indoor and outdoor video and picture surveillance. Sold mostly through SoPower on Amazon, the camera has quickly developed a high reputation that gets backed with a solid product warranty.

Who Is This Product For?

The great thing about this camera is its versatility and the features that make it a suitable and affordable option for anyone requiring a photo or video surveillance. The Gosira trail camera was designed with hunters in mind, so it is quickly camouflaged in the trees, and it won’t scare off whatever movement you’re trying to capture.

Whether you’re new to hunting and just wanting to scout territory for signs of wildlife, or you’re a homeowner who wants to see what your dog gets up to while you’re away, this camera could be right for you.

The standard package contents are included in the box, so you can get your camera up and running as soon as possible. You receive the Gosira Trail Game Camera, a wall/tree mount, mounting belt, USB and video cable, and thorough instruction manual.

The broad features of the Gosira camera make it a must-have for hunters on a budget. It has an interpolated 12MP photo resolution with a 5MP image sensor that provides clear and color images in the daytime. The red-glow technology spans a range of up to 65 feet, and the lack of flash doesn’t scare your game away.

You can rest easy knowing that anything at least 65 feet away from your camera is going to be captured with the 20-meter trigger distance and 0.4 second trigger time. The detection circuit angles a zone that covers 120 degrees, so activity is recognized even if it’s not right in front of the camera’s sensors.

With the Gosira, you can store your files as a photo JPEG, video AVI, or motion JPEG and it takes a standard SD card and 8 AA batteries. Additionally, you can use eight rechargeable batteries, but it’s best to use those that have a low self-charge, so you get the full six months of standby time. There is also an external 12V power supply.

Like many other things, the first step to using your Gosira camera is reading over your owner’s manual once you take it out of the box. Doing that makes it so you aren’t going in blind, and you have a better understanding of how the camera operates before mounting it in your home or outside.

After you have removed the protective plastic from the lens and installed your new or fully charged batteries, you need to configure your camera to suit your needs. The Gosira’s menu settings are quite straightforward, so you just need to open the box, press the button labeled menu and use the arrow buttons to navigate through each setting until you’ve configured it the way you like.

Make sure that you slide the mode switch to arm your camera “on” before you mount it, and that’s it.

The Gosira provides high-quality photos and video for the price point, but if you’re looking for something with added features and that’s a little less costly, the APEMAN 12MP Trail Camera is an acceptable choice.

The Gosira 1080P trail game camera is a fantastic option for those looking to monitor their property or the outdoors. It’s user friendly and doesn’t require you to be overly tech savvy to figure it out. The quality of the images and video both during the daytime and at night have exceeded expectations, while the six-month battery standby time is average. There were slight difficulties with understanding the instructions, but once past that, everything was fine.

Uploading data from the camera to the computer with the included USB and video cable was easy, and being able to view the images on the LCD was another high point that made it worth the money.

This trail camera gets highly recommended for those who aren’t looking to spend a lot of money on surveillance but don’t want to skimp out on any features, either. As a bonus, when purchasing the camera, there’s also a 12-month warranty that ensures you’re getting the most out of your money.

How to Find Trail Cameras in The Woods: A Beginner’s Guide